选择的已放入购物车
Save succeed!
Check my wishlist? 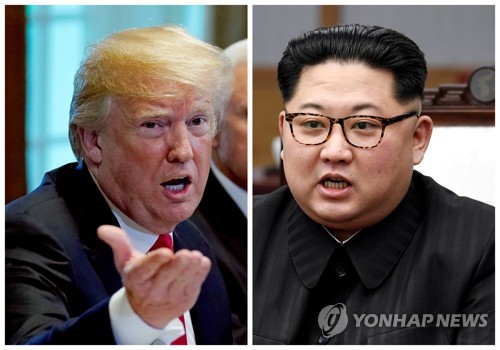 These Reuters photos show U.S. President Donald Trump (L) and North Korean leader Kim Jong-un. (Yonhap)
In Korea, senior diplomats of the North and the U.S. appear to have wrapped up days-long consultations at the border security zone of Panmunjom.
The U.S. negotiating team, led by Amb. Sung Kim, checked out of a Seoul hotel on Thursday, a source said.
"North Korea and the U.S. will likely have additional contact in Singapore" to fine-tune the summit agenda, the source added.
The upcoming summit raises hopes for a landmark breakthrough in efforts to resolve the North Korean nuclear issue and bring lasting peace to the peninsula.
"The most the U.S. seeks seems to be the complete dismantling of North Korea's nuclear weapons and ICBMs and transporting fissile materials out of the country," said Kim Joon-hyung, professor of international affairs at Handong University.
What North Korea desires is, he added, normalized relations with the U.S. through a formal end to the Korean War, a nonaggression commitment and the establishment of a peace treaty, as well as the speedy lifting of sanctions.
While the North has kept mum on its summit preparations, Trump's and his Twitter messages are a rare "credible" source of relevant information.
Trump initially talked about a speedy "all-in-one," or one-shot, option in which North Korea gives up its arsenal soon after an agreement is reached, as the North's leader reportedly prefers a "phased, synchronized" process.
Emerging from a White House meeting with a North Korean envoy last week, Trump indicated that he won't rush to a deal and might accept an incremental approach.
"The big deal will be on June 12th. And again it's a process. ... We're not going to go in and sign something on June 12th, and we never were. We're going to start a process," he told reporters. "We can go fast. We can go slowly. And I think it'll be a process. I never said it goes in one meeting.
It's not certain whether he has actually lowered the bar or merely sought to lower public expectations for a significant breakthrough from his first meeting with Kim.
Speaking at a Singapore security forum at the weekend, Secretary of State Jim Mattis pointed out that a "bumpy road" lies ahead even in the best-case scenario.
He warned the North not to expect any "relief" to the sanctions in place against the regime before its full denuclearization.
If Trump walks out of the historic summit without a written agreement, it would be considered a failure and he would face harsh political attacks at home, months ahead of the mid-term elections.
The former businessman, who styles himself as a master negotiator, may sign a framework of denuclearization-for-regime security measures and let working-level officials handle "the devil in the details." 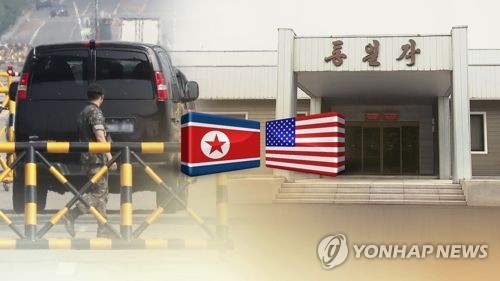 This image shows the location of working-level talks between North Korea and the U.S. at the Panmunjom truce village in Korea. (Yonhap)
"I think there will be compromise on the principle of full denuclearization and a security guarantee," said Yang Moo-jin, who teaches at the University of North Korean Studies. "In addition, there could be a few more deals on issues such as a roadmap for denuclearization and its timetable."
Another key question is whether Trump and Kim will strike an agreement on formally ending the Korean War, which ended in a truce 65 years ago.
Trump said he had talked with the North's envoy on the matter. In case of an agreement on the highly symbolic issue in Singapore, South Korean President Moon Jae-in may fly there for a ceremony.
Moon's office Cheong Wa Dae said it's up to Pyongyang and Washington and that no decision has been made yet.
lcd@yna.co.kr

This site is all about the partnership with the professional shopping mall operator Hankukwang, all operations management, personal information, billing information, and payment. This Korea.com is not responsible for retaining member information or payment information.Thus, the Hankukwang is responsible for various disputes and product ownership related to operation and management of this platform. Accordingly, Hankukwang is in charge of disputes and product ownership regarding operation and management of business platforms.
Company：Korea.com | President：Youngrok Choi
Address：Rosedale #1201,280 Gwangpyeong-ro Gangnam-gu Seoul,Korea
Tel：+82-1800-1975, E-mail:c650912@naver.com
Customer service: Mon~ Fri 09:30~17:30
Copyright ⓒ2018 Korea.com All Rights Reserved.