选择的已放入购物车
Save succeed!
Check my wishlist?

Choo walked two times in Rangers' 8-4 loss to the Boston Red Sox at Fenway Park in Boston on Tuesday (local time) to stretch his on-base streak to 48 games.

The 35-year-old South Korean now shares the longest on-base streak among active players with Joey Votto and Albert Pujols. Votto achieved the feat in 2015 with the Cincinnati Reds and Pujols reached that record in 2001 with the St. Louis Cardinals.

On Sunday, Choo set Rangers' franchise on-base record by surpassing Julio Franco's 46-game streak. The Rangers' longest on-base streak at any point is held by Will Clark, who reached over the 1995 and 1996 seasons.

The Major League Baseball (MLB) record is held by Ted Williams, who reached base in 84 consecutive games in 1949.

Choo, who was recently earned his first MLB All-Star selection, grounded out to start the game, but drew a walk from Red Sox starting pitcher Hector Velazquez in the top of third inning. Choo suffered another ground out in the sixth, but in the ninth, he drew a base on balls from Ryan Brasier to reach the first base. 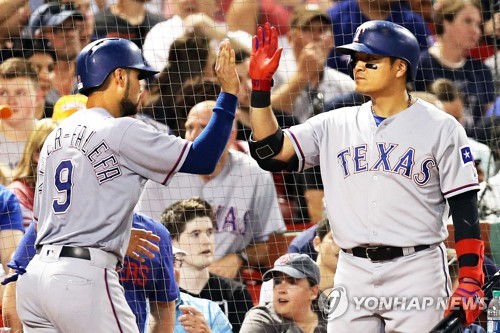 This site is all about the partnership with the professional shopping mall operator Hankukwang, all operations management, personal information, billing information, and payment. This Korea.com is not responsible for retaining member information or payment information.Thus, the Hankukwang is responsible for various disputes and product ownership related to operation and management of this platform. Accordingly, Hankukwang is in charge of disputes and product ownership regarding operation and management of business platforms.
Company：Korea.com | President：Youngrok Choi
Address：Rosedale #1201,280 Gwangpyeong-ro Gangnam-gu Seoul,Korea
Tel：+82-1800-1975, E-mail:c650912@naver.com
Customer service: Mon~ Fri 09:30~17:30
Copyright ⓒ2018 Korea.com All Rights Reserved.